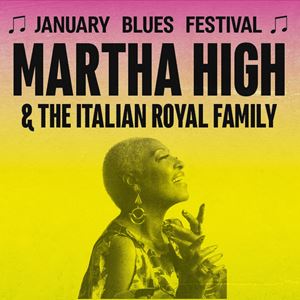 Soul-Blues Vocalist Martha High is the 'Hardest Working Woman in Show Business" and was a part of the James Brown Soul Revue for over 30 years.

Martha launched her solo career in 1979 on Salsoul Records and has collaborated with Speedometer & Osaka Monaurail in recent years.

Martha High has also been a part of the Maceo Parker band for 16 years and started her career as backing vocalist for Bo Diddley.

Tonight, Martha is backed by the Italan Royal Family with whom she has recorded her new album "Nothing's Going Wrong"