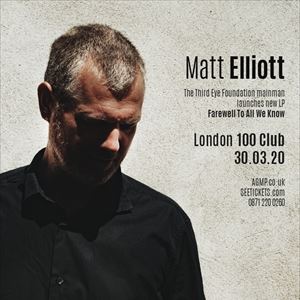 Matt Elliott started out as The Third Eye Foundation in 1995. The seminal 'Semtex'album was released the following year followed by three albums with Domino Recordings. Musically, The Third Eye Foundation were described as 'Post-Rock', 'Drum & Bass' or 'Glitchtronica'. Since 2003 he has recorded under the name Matt Elliott releasing eight albums of experimental dark-folk. Over the years Matt Elliott has worked with Yann Tiersen, Mogwai, Chris Morris, Thurston Moore, The Pastels, Blonde Redhead, Remote Viewer and more.

The new Matt Elliott album ‘Farewell to all we know’ is released in February 2020.