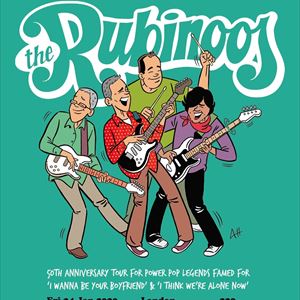 Power Pop Legends return to London celebrating the 50th anniversary of their formation and the release of their incredible new album 'From Home' on Yep Rec Records.

Founded in Berkeley by Tommy Dunbar and Jon Rubin, The Rubinoos are one of the seminal power pop artists of the 1970s.

In 1977 they hit the top 40 with a cover of Tommy James’ “I Think We’re Alone Now.” In 1978 they followed it with the power pop classic “I Wanna Be Your Boyfriend”, which was named record of the year by Music Week Magazine. In '84 The Rubinoosrecorded one of their most popular songs, the title cut of the film "Revenge of the Nerds".

Several albums, tours and decades later The Rubinoos can still crank out the pop gems. In 2007 the band was honored with the career spanning 3-CD anthology, "Everything You Always Wanted To Know About The Rubinoos".